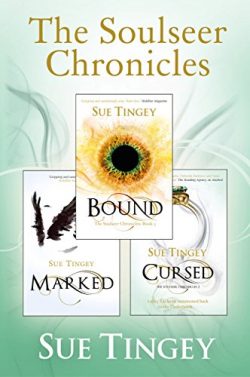 When you tell people you’re a writer one of the first questions is usually “what do you write?” Up until a few years ago I would have said fantasy and horror, simple as that. This all changed after I wrote the novel that was to become “Marked” the first book in the “Soulseer Chronicles” series.

The book originally was going to be about a true psychic and ghost hunter who also exposed fake mediums then, a few pages in, I had a nightmare and it was a humdinger! This gave me a character who was far too good not to use and he sent the book in a whole different direction. Even then it wasn’t my intention for it to be a romance; it was going to be about evil daemons, dungeons, torture and drakons. The two male leads however had other ideas and while my protagonist, Lucky de Salle, and I were focused on keeping her alive and in one piece until the end of the book, they between them slowly and insidiously began to crank up the sexual tension.

The penny finally dropped that I’d written a romance when my publisher sent me an e-mail one February asking if I’d write a piece for the blog to be posted on Valentine’s Day. Her e-mail read “I wondered if you could do a piece perhaps along the lines of why you enjoy writing and reading romantic fiction”. Do what? I don’t write romance; do I?

As far as I was concerned I wrote fantasy. To my way of thinking relationships, sex and love are all part of life’s rich pageant so most stories usually touch on these subjects in one way or another. Mine certainly do. Then I thought about it – I had been so wrapped up in Lucky’s dilemma that it hadn’t occurred to me what Jamie and Jinx were up to. I know this sounds totally barking and perhaps I am, but I know my stories are working when the characters begin to take on a life of their own and just won’t act in the way I had planned for them and this is what had happened with Jamie and Jinx. Like how most people know how close friends or family will react in certain situations, I knew how they would or wouldn’t act.

So, do I write Romantic Fiction? I have certainly embraced the concept, but I will leave it up to the people who matter – my readers. Let me know what you think.

To set the scene the first book Marked is the story of Lucky De Salle who is a social misfit having been able to see the dead for all of her life. It transpires that she is actually half daemon and, through no fault of her own, suddenly finds herself dragged into a power struggle in the Underlands the home of daemonkind. She is marked by two higher daemons Jamie and Jinx, which in her case isn’t actually a bad thing as they can protect her while she’s finding her feet in a totally alien world. However she soon begins to realise it’s her heart just as much as her life that’s at risk when she starts falling for both daemons. In this scene from the second book Cursed irreverent bad boy Jinx, the Deathbringer (the title by the way does mean what it says – when he walks in our world death follows) finally tries to tell Lucky how he truly feels.  Enjoy!

‘When we marked you we didn’t realise what you were.’

‘That’s right. We are meant to be together. Together we are more powerful than you can possibly imagine, but you; you’re powerful in your own right and we need to let you come into that power. We can’t always protect you and I doubt you’d want us to. You’re strong, independent and I want you to stay that way, because that’s what makes me. . .’ He stopped and looked down at his feet.

He started fidgeting. ‘If I let you go down into the Sicarii temple and you never came back James would never forgive me.’

‘Yes, because I’d never forgive myself.’

This was getting confusing. ‘But you were all set to let me go before, what’s changed your mind?’

Jinx shook his head. ‘I can’t tell you.’

‘Jinx, why must you always talk to me in riddles?’

He took a quick peek at my face then looked away. ‘He said that if I didn’t love you enough to keep you safe I should let you go. And when I thought about that and letting you be his alone, I knew I couldn’t do it.’

‘So this is all about you not wanting Jamie to have me to himself?’ I said in exasperation.

‘No,’ Jinx said his voice barely a whisper. ‘It’s about me being unable to let you go – it would suck the warmth from my soul, and my soul has been so cold for so many years I couldn’t bear for it to be that cold again.’

I think my jaw dropped open. ‘I don’t know what to say.’

‘Say you’ll let us protect you,’ he paused his eyes searching mine, ‘and promise me you’ll never ask me to let you go.’

‘Oh Jinx,’ I said resting my palm against his chest. So warm, so solid; his heartbeat so steady.

Then my fingers were on fire and Jinx went rigid beneath my hand. Something warm and sticky ran down my wrist as Jinx sank to his knees. I looked at my hand, blood was pumping out from between my fore and middle finger and my palm was slick with blood; Jinx’s blood mingling with mine.