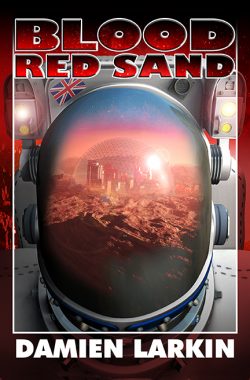 I have been rather remiss about posting recently, to be fair not a lot has been going on during lockdown, but when I heard Damien had a new novel coming out and he very kindly sent me a review copy, I thought it would be a good time to catch up with him and find out a bit more about his latest SciFi novel – Blood Red Sand.

Hi Damien, and thanks for letting me have a sneak preview of your latest novel – Blood Red Sand. Can you tell us a little about it and what we have to look forward to when it hits the stores?

Blood Red Sand explores some of the historical events referenced in Big Red. There were a few instances when characters mentioned the first battle of New Berlin colony between the Allies and the Nazis, but this was never explored. Some readers and colleagues mentioned it to me which got me thinking about how that battle came about. As soon as I had the foundations set, I couldn’t stop writing!

Have you any plans for a direct sequel to Big Red?

Yes, I had major plans to delve into a direct sequel for Big Red and to date I’ve written (and thrown out) three drafts of it. I made a bit of an amateur mistake by diving into it before Big Red was out and while I was trying or organise Big Red’s launch which caused me to burn out a little. I decided to press pause on it for a while and focus on other projects. By the time I went back to it, the overall story just didn’t seem right for where I wanted it to go. After numerous edits and rewrites, I figured it’d be best to take some time off again and look at it from a fresh angle in the future.

I can share that the working title is ‘Born Red’ and it’s told in a similar format to Big Red. It’ll explore events after the Hollow insurrection on Mars and Dub’s attempts to atone for the horrible actions he’s committed in the past.

A little birdy has told me a prequel to Big Red might be in the offing – any comments on this?

Ha ha, yes! Blood Red Sand itself can (kind of) be considered a sequel. It takes place around twenty years before the early events of Big Red, but thanks to the time travel elements in the story, from certain characters points of view, it’s set a few days after the final chapter. Ah, the joys of time travel!

I have considered writing a ‘true’ prequel short story which delves into why Dub and the Second Battalion were specifically chosen for the Hollow Programme, but I think I’d need some more revelations to come out first, so it makes sense.

Why is the British and Irish Writing Community so important to you?

When I started my writing journey, I didn’t know anyone. I’d read all the blogs and articles that mentioned Twitter as a great place to network with other writers, but initially failed to make any connections. One day, I randomly came across a tweet from author Phil Parker mentioning how he’d love to see a speculative fiction community that promotes Irish and British writers. After a few emails and along with Lee Conley, the BIWC was born.

As a community, I find it to be a fantastic support network. We’ve writers at different stages in their careers and writing across all genres, banding together to share tips, promote each other’s work and celebrating their colleagues’ achievements.

Together, we’ve built Bard of the Isles e-magazine and I’m really excited to see what we’ll do next!

How has your time in the RDF influenced your writing?

I spent seven years in the (Irish) Reserve Defence Forces, and I really look back fondly at those times. It could be exhausting, mentally and physically and very demanding, but I wouldn’t trade those moments for the world. Along with making some life-long friends, I also learned skills that have really helped me in my personal and professional life.

On the writing side of things, having the discipline to stick with something and not get discouraged from various speedbumps along the way, come directly from lessons I learned during my training. Being primarily a military science fiction author, my time in the RDF has certainly helped give me a better understanding of crafting battle scenes!

Is there anything that has surprised you about your writing since beginning your career as a writer? For instance, I always thought of myself as a horror/dark fantasy writer and would never write romance or crime and yet, to my complete surprise my first series was publicised as Fantasy Romance and my second as Supernatural Crime.

Great question! I’ve also enjoyed writing/reading more action-orientated stories, but a few weeks ago, I found myself dwelling on a potential SF-Horror story. Although, I enjoy Horror movies, I’ve never read many Horror books, so I picked up a few of Stephen King’s works plus some from a few indie authors to get a sense of the genre.

I couldn’t shake the idea, so I started working on a SF-Horror novel called The Dead Marie which I’m roughly 51k words into (at the moment). It’s strange not having gun battles, explosions and warzones left, right and centre, but I’m really enjoying the challenge and can’t put this WIP down!

Talking about Stephen King, he once famously said he wrote every day except Christmas Day, then later said he’d fibbed about Christmas Day. Tell me about your writing ethos – do you write every day? And do you set yourself targets?

I’d consider myself to be fairly driven, so when I have an idea, it’s hard for me not to be working on it! I do write most days, normally during my lunch break in work or after work, if my children are out and about. Where possible, I try and set myself 1k targets, but a lot of it comes down to how my mindset is on a certain day. Sometimes, the words just pour out and I find myself writing 2k words with ease. Other times, it’s a struggle to get 300 words down.

I try and set myself a weekly target of 5k words minimum with the view to getting a first draft done within at least four months of starting. Most weeks, I exceed that target as I’m eager to get the first draft done and dusted, so I can dive back into various rewrites and edits.

Do you write straight onto a laptop or computer or do you handwrite first?

Yes, it’s all straight onto the laptop for me. I have terrible handwriting, so seeing a first draft like that would probably crush me!

I’d normally read a lot of SF, but I’ve been checking out a lot more Fantasy and Horror recently. There are so many authors to choose from, but some of my favourites would definitely have to be Tripp Ainsworth for his Smokepit Fairytales series, Lee Conley for The Dead Sagas and Jessa Forest’s Pulling Teeth and Other Stories.

I’ve also come across a few books that have jumped out at me from beta and ARC reads. In particular, I’ve really enjoyed Awakenings by PS Livingstone, The Skin by J.E Hannaford, The Typhron Odyssey by S.D Howarth and I’m currently reading (and enjoying) The Horns of the Hunter by Frank Dorian.

What is your favourite film(s) and TV series?

Casino is probably my favourite film. It’s one of those all-time classics with a star-studded line up that I could watch and rewatch and never get tired of.
I’m also a huge Star Trek fan and go through periods of watching all the series from the start to finish and then do it all over again.

So, you’ve told us a little about possible future projects – is there anything else exciting in the pipeline?

Aside from what I’ve mentioned, I’m planning a spin-off set in the Big Red universe. It’s under the working title of Red Young Guns and focuses more the American zone of occupation on Mars, set parallel to the early events in Big Red.
I’ve also recently finished a project called The Truceless War which is a futuristic SF retelling of the First Punic War. I’m really tempted to dive into the second book in this series, but I should probably wrap up a few other projects first…

For anyone who wants to meet you or see you talking about your novels, are there any events you’re planning on attending/participating in during the forthcoming year (restrictions allowing)?

At the moment, it looks like I’ll be participating (in some form) at Octocon here in Ireland. I’d also like to attend Titancon in Belfast again, but it completely depends on restrictions. I’d love to return to Bristolcon, but it’s most likely going to be next year until I can return to the UK mainland.

Blood Red Sand is out on the 7th July and if you would like to visit Damien and see what he’s getting up to here is where you’ll find him and information about his books. 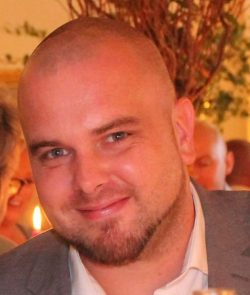